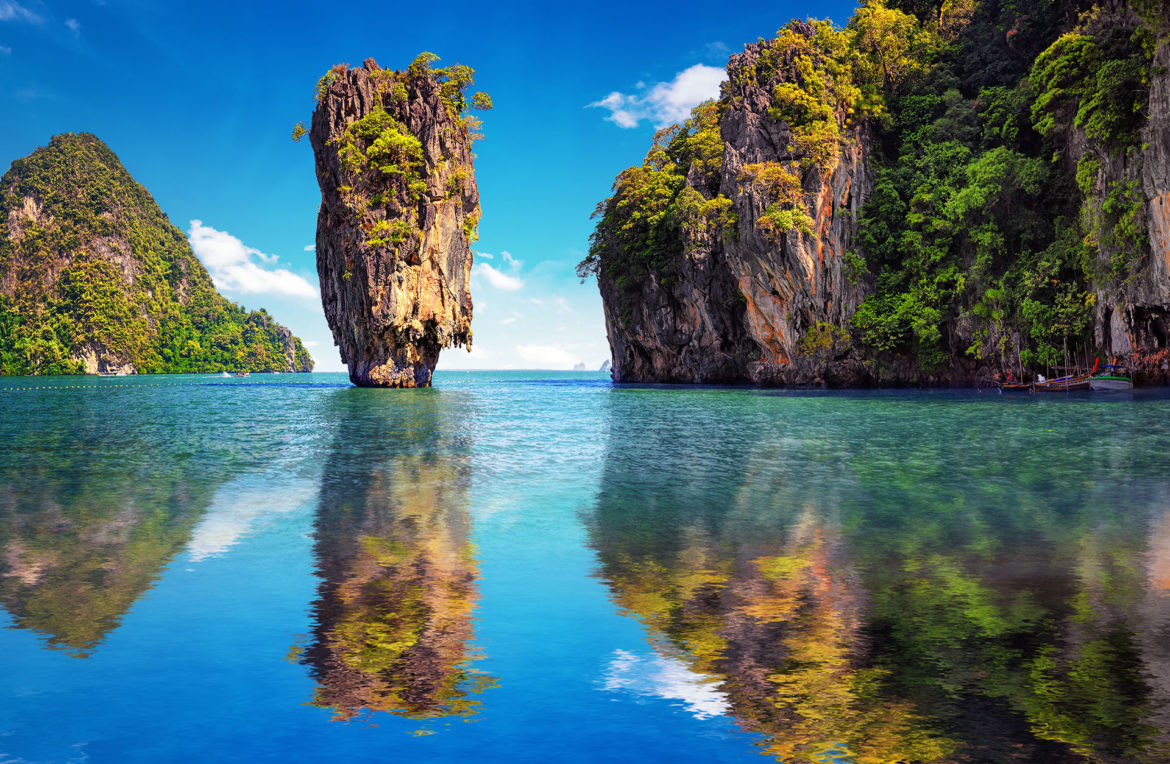 The diving Mecca also known as Phuket has long been touted as the jewel of the Andaman Sea. It dazzles divers with diverse underwater life and countless locations to take it all in.

‘Finding Nemo’ is masterpiece of modern cinema. Among its countless pearls of wisdom is this little gem:

“When life gets you down, you know what you gotta do? Just keep swimming.”

Wiser words were never uttered, and we can thank one bug-eyed blue tang with a hilarious case of amnesia for their sentiment. So, embrace your inner Dory (or Nemo) and traverse the tantalizing depths surrounding Phuket.

Are you looking to become certified in PADI or SSI? Need a refresher course to update your skills? Just want a day trip to one of the local sites? Perhaps you’re an experienced diver hoping to spend a week or more submerged. Luckily, Phuket boasts an underwater wonderland so sublime you’ll want to swap your lungs for gills.

SSI or PADI? The two certifications are very similar, though PADI is more internationally recognized.

These locations are your best bet when considering diving as part of your holiday. They are the most popular dive sites when it comes to beautiful ocean life, safety and being easily accessed.

For those who prefer to stay close to home, or suffer sea sickness, there are a number of spots just off the west coast of Phuket that are easy to reach and a joy to dive. These include Bang Tao Beach, Freedom Beach, Paradise Beach, Kata Beach and Patong Beach. Beginners and snorkelers are particularly encouraged to visit these sites, where depths average 5-6m.

Racha Yai and the smaller Racha Noi make up the Racha Islands. The former is appropriate for novice divers and professionals, while Racha Noi should be left to the pros.

Racha Noi is just over an hour from Phuket. Strong currents and deep dives make this site better suited to experienced divers. Intermediate divers are encouraged to dive the island’s northern tip where a large pinnacles abound. Expect to see reef sharks, Manta rays barracuda, frogfish and Leopard sharks. Don’t forget to check out the wooden shipwreck on the southwest side of Racha Noi and keep your eyes peeled for Whale sharks.

Giant boulders are covered with hard and soft coral…

Wreck diving dominates Racha Yai thanks to a collection of four sunken vessels lining the waters around the island. Snorkelers are treated to pool-like areas ideal for drifting. In between coral garden you’ll see sharks, rays, barracuda and blue marlin.

Located 32km from Phuket (10km off the coast of Phi Phi), King Cruiser is an 85m passenger ferry that ran aground on submerged rocks at Anemone Reef in 1997 while on a routine trip between Phuket and Koh Phi Phi. The wreck has since become one of the most visited wreck dives in the area, with eels, groupers and crabs roaming the Cruiser’s open decks.

Long before Leonardo Dicaprio made the white sands of Maya Bay iconic in the 2000 film, The Beach, the six islands that make up Koh Phi Phi enticed divers from every corner of the globe. 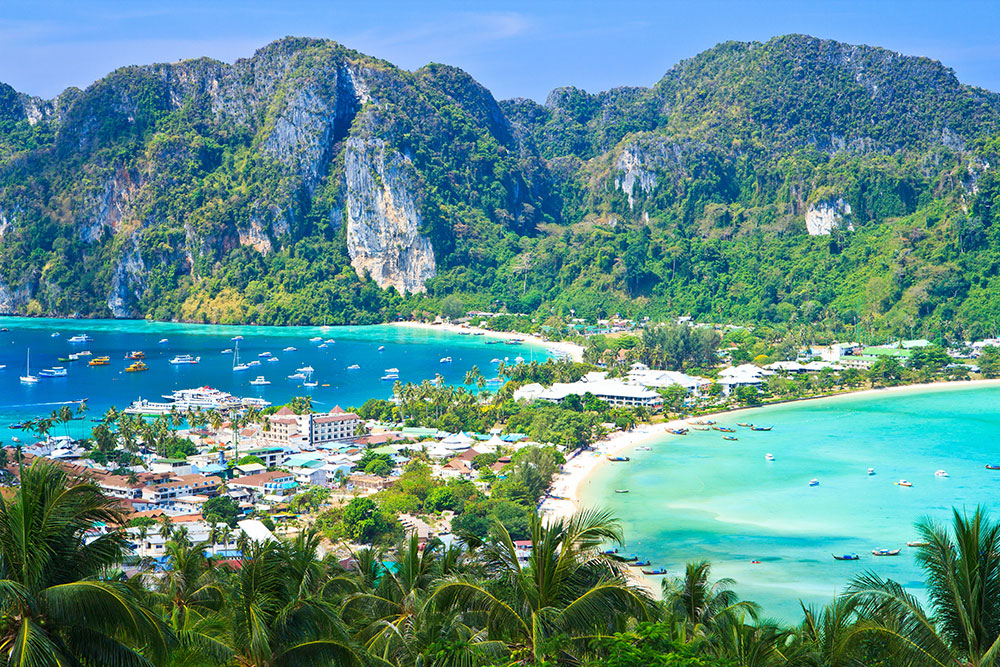 Divers who venture to Phi Phi (just 40km from Phuket) are treated to arguably the best dive sites in the Andaman Sea. Hin Daeng are Hin Muang are two locations not to be missed. Rated among the top dive sites in Thailand, manta rays and whale sharks can be spotted at both, as can crocodile needlefish and imposing walls of schooling fish.

With caves, swim-throughs and overhangs, Phi Phi’s underwater landscape is peppered with meter-high white coral bush (not found anywhere except the waters off Phi Phi).

The elusive whale shark is known to visit Richelieu Rock, which lies 18km east of Surin Islands. The pinnacle breaks the surface at lowtide, when cagey Black Merlin make the occasional appearance. The months between February and April tend to see more whale sharks at Richelieu Rock.

If you like wall diving then you’ll adore Dok Mai. The tiny jungle island of Dok Mai is famous for its coral-covered cliffs that host seahorses, leopard sharks and moray ells. Snorkelling off the beach is recommended.

A tangle of nine islands make up the Marine Park, which was established in 1982. Almost 30 different dive sites are found in the Park, so you can always find a location not overrun with other divers.

Sandy beaches lure snorkelers, and the wall and drift dives act as a magnet for experienced divers.

Beginners are welcome at Anemone reef, where you’ll be forgiven for thinking the coral-covered rock wall is pulsing and moving with the current. It isn’t only divers who admire the beauty of Anemone Reef; leopard sharks, barracuda and countless coral fish are seen swimming around the 30m-limestone structure. Clusters of lionfish, up to a dozen deep, are an Anemone Reef highlight. 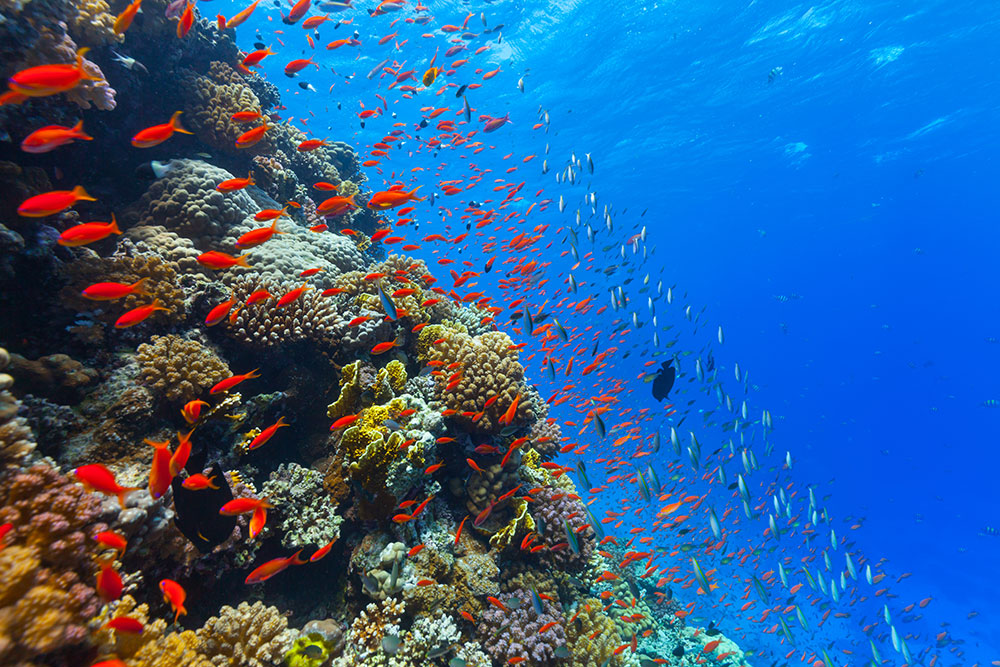 There are too many noteworthy dive sites to mention here in detail, so we’ve compiled a short and snappy list a few more favourites.

The age-old “What should I pack?” dilemma no longer applies because, praise Mother Nature, Phuket welcomes just two seasons – the wet and the green.

Diving in the dry season is preferable because visibility is better and conditions are more stable.

Spanning November to April, the Dry Season coincides with the peak tourist season and parades as many as 26 sunny days each month, averaging 28°C (82°F).

February to April provide ideal diving conditions. Fewer tourists flock to the region than during the festive months of December and January and as such, visitors can expect calmer waters, ideal temperatures, and less crowded underwater attractions. There’s nothing worse than snapping a selfie with a whale shark only to find 100 other submerged foreigners ruining your “Look how at one with nature I am” shot.

April ranks as Phuket’s balmiest month, with temperatures peaking at 36ºC (95ºF). Brief and intense storms cells create refreshing reprieves, but the resulting humidity can be stifling. Less precipitation and lighter winds (if any at all) do wonders for underwater visibility, a fact divers and snorkelers should take full advantage of.

The longer and soggier Green Season (or the Wet season) encompasses the months of May through October. Temperatures can reach 33ºC (90ºF) but generally average more comfortable temperatures.

For those vacationing within the Wet Season, don’t despair. Not only will you enjoy cheaper accommodation and activities, you’ll be spared the tourist torrent (a more unwelcome state than a torrential downpour). Plus, the heavy showers extend a rustic jungle beauty all their own, and believe it or not, the sun still shines for extended lengths of time. In particular, the months of June, July and August bestow ample sunshine and around 20 clear-sky days respectively.

Punctuating the Green season is the rowdy Southwest Monsoon. Bearing down on southern Thailand’s southwest coast, the monsoon keeps things damp from late May to October. The heaviest rains can be expected in September and early October.

Water temp fluctuates only slightly between 28-30 degrees all year round.

As the second largest airport in Thailand, expect swelling crowds. Millions of locals and tourists pass through HKT each year, and as any seasoned traveller knows, a busy airport is not a happy place.

All the major players (and some of the smaller ones, too) run flights in and out of Phuket, so securing a seat will not be a problem. Avoid Phuket’s airport taxi scam and book a ride beforehand with a reputable company. Shuttle busses are cheaper (and safer).

Most visitors come from Samui or Bangkok.

Superb design meets natural beauty at Thailand’s most stunning airport. Located in the region’s north, Samui International Airport showcases open-air architecture at its best. In fact, the whole setting feels more like a resort than an airport, and passengers are invited to dine and shop accordingly. Thatched rooves and palm tree pillars blend in perfectly with the surrounding coconut plantation and add a sense of serenity to the otherwise stressful experience of air travel.

Flights between Koh Samui and Phuket average one hour and a Bangkok Airways provides five fights daily. Vacationers making the journey are encouraged to book their return transfer at the airport on arrival. Choose between private taxi and shared minibus services.

Suvarnabhumi Airport is the country’s largest and busiest. Just 30km east of Bangkok, the 674kms flight to Phuket is covered in under an hour and a half. There are 58 flights departing from Bangkok to Phuket each and every day.

Not departing from Bangkok or Koh Samui? The following airports offer services directly to Phuket:

Alternatively, ferries to Phuket run from Krabi and Koh Lanta.

We hope we’ve piqued your interest with this guide and now you’re even closer to designing your dream Thailand trip. Connect with our Local Designers in Thailand to design your own extraordinary experience with Designer Journeys.

A Foodies Guide to The Greek Islands

Save This Morocco Itinerary for the Perfect...

The Croatia Travel Guide That Will Have...

Breathtaking Places to Visit in Malaysia in...