The Ultimate Guide to Thailand Cycling

Thailand: a country known for its great eats, great beaches and ‘great’ full moon parties (… that last one depends on who you talk to). But, as more visitors are veering off the standard tourist trail – ourselves included – other experiences are rising the ranks in traveller’s lists of Thai greats. Enter: Thailand biking.

We know what you’re thinking: ‘Cycling across Thailand, really?’ We get it, our limbs hurt just thinking about it. So why would anyone besides masochists willingly cycle their way around a country where the year-round average temperature is 30°C and humidity levels are through the roof? For one, the scenery is breathtaking. Enduring kilometres on kilometres of riding is also extremely rewarding, and – music to our ears – it’s relatively cheap to do. Yep, Thailand is well worth a two-wheeled visit. Here’s the best of the best cycling routes to take in the country.

Road riding and racing finds its natural home in Thailand’s north, where steep mountainous terrain, a lively local scene, and the (mostly) favourable climate attracts foreign riders by the truckload. The best spots to cycle in northern Thailand centre around the ancient city of Chiang Mai.

In a nutshell, Thailand’s “second city” is known for its hill tribes, unique mix of architecture (the city’s close proximity to the border means most of the sites are a combination of Lanna, Burmese and Mon building styles) and beautiful mountains. The country’s tallest mountain, Doi Inthanon, looms over the Chiang Mai Provence at 2565 metres tall and yes, you can cycle there.

The Best Cycle Routes in the North

If you’re a reasonably fit rider looking for a good day trip from Chiang Mai, the popular Samoeng loop should fit the bill nicely. This 100km round-trip covers the mountains northwest of the city, reaching a total elevation gain of 1975 meters (head to Bike Map for all the info and nab a handy map too). The quickest this ride has ever been completed is 3 hours and 15 minutes, but it will take the average cyclist around 8 hours to finish up. Here’s what rider Alex Malone made of it.

Riding the Moe Ha Son loop that starts and ends in Chiang Mai is akin to embarking on a fun game of ‘how much pain can you endure?’ Nevertheless, the route remains a popular one, thanks in many parts to it being unattainable for so many. It’s a gruelling weeklong slog of misty mountain roads and, we’re telling you now, it’s not for everyone. Before you take on this mammoth trail, read Luke Pegrums’s account of the brutal, almost friendship-ruining five days he spent riding Moe Ha Son. Don’t worry, it ends well.

This is as good a time as any to point out that a number of tour groups lead organised cycles across Thailand. For those on a tight schedule, not confident in going solo, or seeking a few more comforts on the road, professional cycling tours are your best bet. Among the most recognised service providers are Spice Tours, Crouching Tiger Cycling Tours, Siam Bike Tours, and x adventure asia. Granted, it’s more expensive to sign up but for many it’s worth it. Tour guides organise all the logistics, provide refreshments and accomodation along the way and best of all, have a car close by to carry the bags. 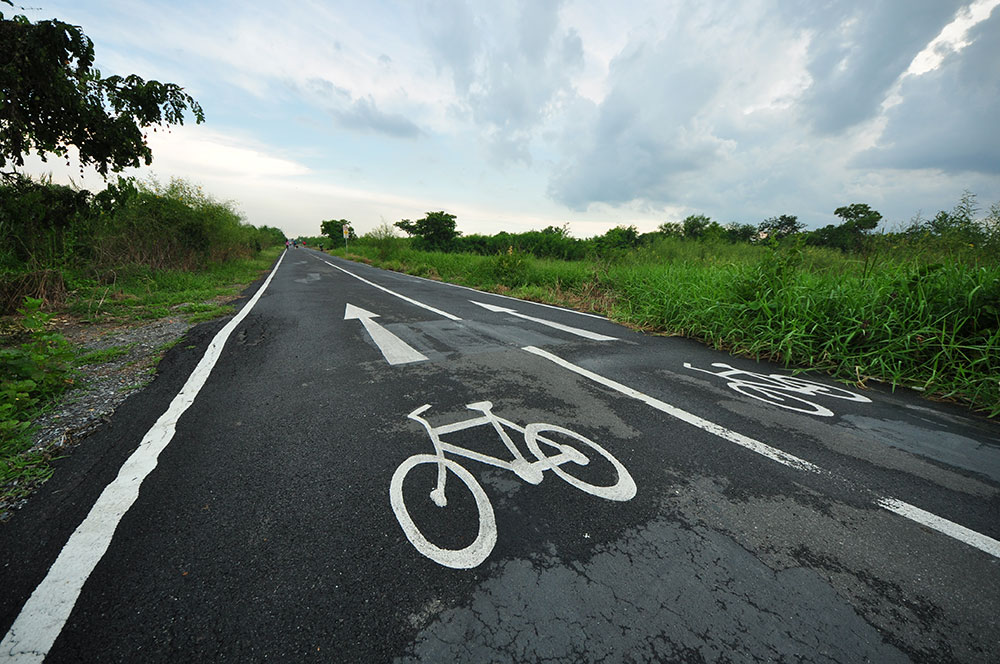 Northern Thailand may have the tallest mountain peaks, the big-name visitors (Olympic teams train there) and a thriving cycle scene, but Southern Thailand has the beaches and the more relaxed routes. Many flock to the South’s shores throughout the year. Like their Northern counterparts, burning rubber is one of the first things on the agenda.

The Best Cycle Routes in the South

A ‘best of’ ride through the country’s southern coast is becoming a popular choice for lone cyclists and tour groups. Most begin the ride from Nakhon Si Thammarat – one of the most ancient cities in the country – heading north along the striking beaches of Khanom. The routes usually include riding around the Khao Sok National Park before finishing up the two-day ride in Phuket. For those looking for a shorter, less intense tour de Thailand, this route is ideal.

One of the most popular cycle routes from Bangkok, you’ll come across more than a few fellow riders on your trip to Phuket. The ride hugs the coast of the Gulf of Thailand before before crossing the isthmus of Kra to the border with Myanmar. Then you’ll follow the coast of the Andaman Sea to Phuket. Despite the many, many ks, on the whole this route is pleasant and easy going, and experienced riders shouldn’t face any problems.

Each cycling tour of Thailand is different. Your riding experience, holiday expectations and physical health should inform which route is the right one for you and how to prep for it.

If you’ve planned a mammoth seven-day ride, the mental and physical preparation you’ll have to undertake will be very different to if you’re considering a cruisy cycle excursion through the city (incidentally, there’s some very cool bike tours in Bangkok). Physically, a longer ride means ample training beforehand – cyclists undertaking big rides should follow the lead of cyclist Luke Pegrum from Perth who, with years of cycling under his belt, practiced by some run-throughs in the city’s hills. 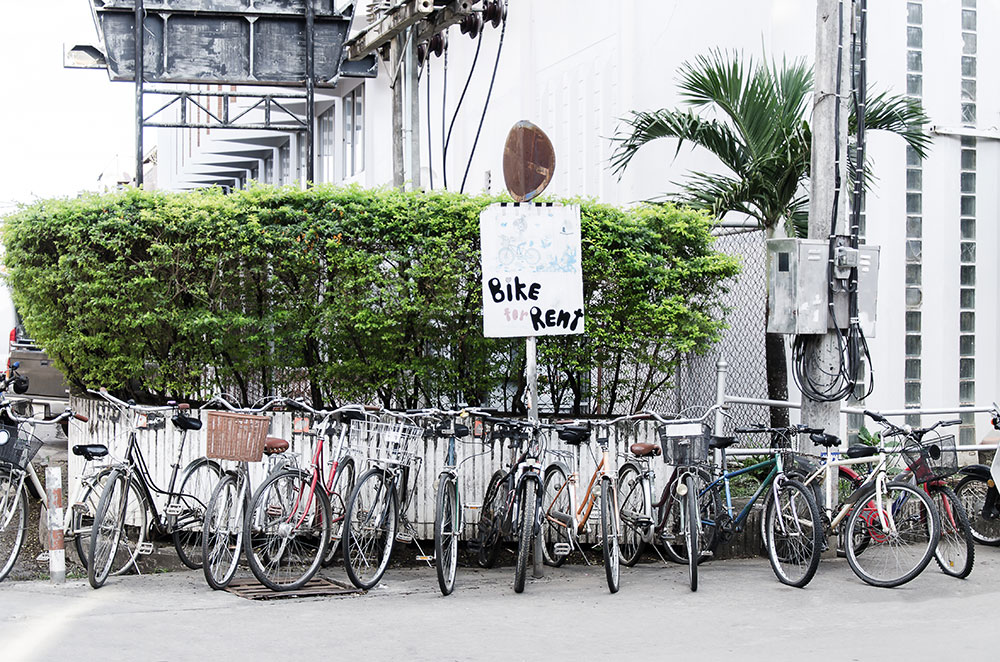 To get through a gruelling ride, you have to be confident. Not just in your physical ability, but also in the wheels that are going to take you there. If only for peace of mind, it’s worth taking your bike in for a service before you ride. There’s plenty of great bike shops throughout Thailand and many of the vendors, in the cities mostly, can speak at least some English. On the upside, it’ll be way cheaper to fix up your bike here then at home ($10USD usually covers a thorough service and clean). Canadian-owned bike shop Top Gear is a traveller favourite in Chiang Mai, while Bike Zone in Bangkok’s Amarin Plaza is another top pick.

If you’re unlucky enough to get a flat tyre on the road, take your tuckered-out wheels to a service station – the majority of these shops will have an electronic pump that you can get air from. If not, most motorbike shops will have pressurised air available too.

Beyond what they have on the ground, you’ll need to think carefully about your packing choices. You’ll be carrying your own luggage and every extra gram counts. If an item is not an absolute essential, it’s best to leave it at home. In other words, you don’t need that third pair of identical denim cutoffs.

Lightweight comfortable cotton clothing, closed shoes, bug repellent and painkillers are clear must-haves and there’s some cycling equipment you should keep handy as well. Here’s what the experts recommend packing…

For more on what to bring, take a look at this cycling holiday checklist.

Transport with your two wheels

So you’ve got your bike, brought the necessary equipment and you’ve been responsible enough to get it serviced. But what happens if you don’t want to ride it absolutely everywhere? Breathe easy, public transport providers are used to people carting bikes around, so cyclists and their wheels are welcome on trains and buses for a fee. On the train, bikes are normally checked in as cargo. The charges for this will set you back a few times the cost of the ticket, though by Western standards, it’s still a sweet deal.

Air conditioned buses cruise all around the country’s main spots, and are another good transport option. Buses depart more frequently and the seats are definitely more comfy, but there’s no set price for bringing your bike on board, which can leave travellers open to some potential swindling. Small luggage compartments are also an issue. Often riders will have to take the wheels off and turn the handlebars in just to fit their beloved on board, which can be annoying. Cycling duo Friedel and Andrew said their bikes endured a few scratches after a ride in a bus’ boot. 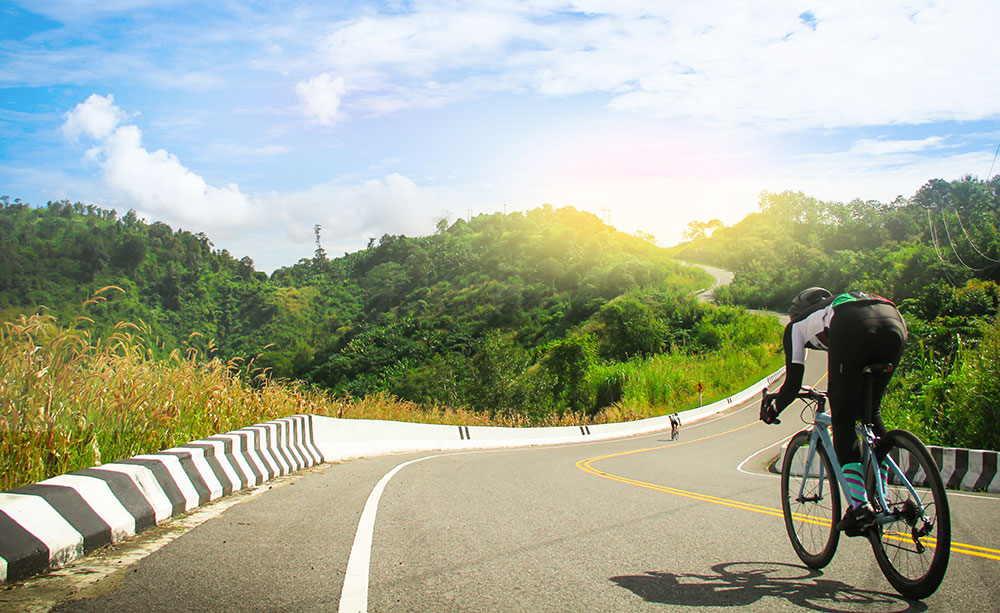 Thailand is hot and humid year-round, and you can expect temperatures to average around the 30°C mark, though they can dwindle to 18°C in the cooler months and up to 36°C in the hot season. The cool season (from November to February) is your best bet for a comfortable cycling tour, before the rising temperatures of the hot season hit (March to May). The unpredictable wet season is in full swing by June, but thankfully it’s not as debilitating as it sounds. Storms arrive on time most afternoons but the rains rarely majorly disrupt travel, so unless you’re precious about pedalling in the rain, you should be fine to continue on. The price of getting your hair wet is a good one, though. The rain keeps beach-worshipping tourists at bay for a few months, which means cheaper and less-crowded accommodation, as well as the chance to see Thailand’s fields and hills at their most verdant and lush. For more weather info, head to Travel Online.

Well known cyclist meccas like Chiang Mai has seen more travellers taking up two wheels on their tour de Thailand, and on the whole, it’s a safe touring option. Here’s some things to keep in mind if you’re thinking of burning rubber in Thailand…

As we said, temperatures average 30°C in Thailand, no matter what the time of year, and the humidity remains pretty stifling throughout the seasons too (Travel Online has the details).

Drink plenty of water to avoid dehydration (the amateur cycling bloggers from Wanderlust Magazine wore a pretty nifty hydration pack which did the trick) and steer clear of excessive alcohol when you’re riding. No one wants to face a 62km spell up steep mountain terrain hungover. Also, start your cycles in the early morning: get going from 6am and ride till at least 10am. Then, by the time lunchtime rolls around, find a shady spot and join the locals in a 12pm siesta to avoid the worst of the day’s heat.

As anyone that’s already been to Thailand’s Monkey Island can testify, monkeys are a mischievous, and often quite intimidating, bunch for well-meaning tourists. You’ll usually find them hanging around temples, and we suggest steering clear unless you want to be short of food or money for the next few days – they’re known for their thievery.

Street dogs are a dime a dozen wherever you go in Thailand. Unfortunately, they’re intrigued by bicycles and often will give chase to scared cyclists. In this case, pedal fast. 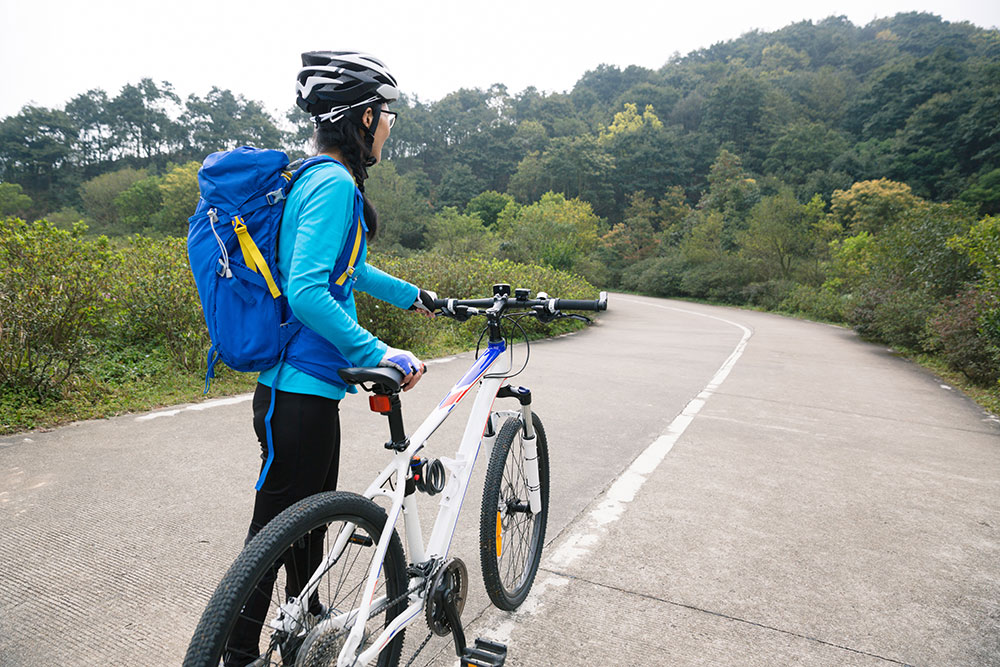 Thailand is cyclist-friendly – there’s cycle lanes on motorways and drivers are quite considerate to cyclists on the road. That said, cycling in cities (ahem, Bangkok) can be intimidating, so unless you’re a confident rider, we suggest taking a train and starting your ride outside of the city. Always ride in single file if there’s a big group of you, and give your wheels a rest come nightfall.

The jabs you’ll need before you head off to Thailand depends on where you’re visiting, what you’ll be doing and your own medical history, though there’s some diseases that we know you should be covered for before your trip (the World Health Organisation’s county profile page has all the details). 4-6 weeks before you jet off, visit your local GP to discuss your Thailand trip and get fully vaccinated. A little bit of organisation on your part and you’ll breathe a whole lot easier on your travels.

The Greece Travel Guide That Will Have...